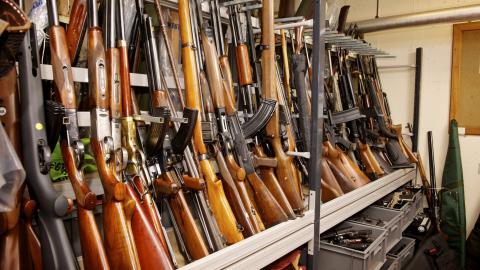 Albanian Police seized 18 illegal weapons bases on Thursday in the capital, Tirana, which they believe are connected to organised crime groups and arrested five people. Another two were declared wanted.

"The 18 bases were used for the modification, storage and sale of combat weapons by criminal groups that committed crimes against people," the police said in a press release on Thursday.

They added that they found and seized different kinds of weapons, such as snipers, anti-tank weapons and police and army radios.

During the operation, they detained three persons named Paris Prenga, Bledar Deda and Flor Abazi, for whom the Special Prosecution Against Corruption and Organized Crime, SPAK, had earlier issued detention orders. A fourth man, Sokol Gjura, was declared wanted because he left Albania some weeks before.

"These persons, together with two other previously arrested persons, Ermond Jamaku and Enver Jamaku, are suspected of being the perpetrators of an event that took place on October 18, 2019, in Tirana, when an attempt was made to kill a citizen, A.B., with a remote-controlled explosive," police said.

"The wanted person Sokol Gjura is suspected, together with the two other previously arrested persons, Ermond Jamaku and Enver Jamaku, of being the perpetrator of an armed attack on a citizen, P...