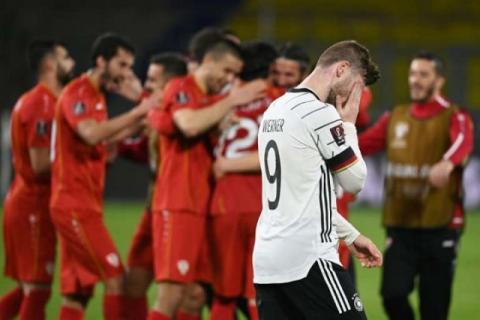 Napoli midfielder Eljif Elmas secured a famous victory for North Macedonia in Duisburg, scoring five minutes from time to give his country a second win from three Group J matches.

Veteran striker Goran Pandev, 37, put the visitors in front just before half-time but Ilkay Gundogan levelled from the spot after Leroy Sane was fouled in the area.

Timo Werner missed a glorious chance after coming off the bench, and Elmas condemned the four-time world champions to a first defeat in qualifying for the global showpiece since 2001 when he steered in a cut-back from Arijan Ademi.

"I don't know how to explain it. It's not easy to do. We knew that we couldn't underestimate the opponent and I don't think we did that. We just weren't good enough," said Gundogan.

"It's not quite sunk in yet. This is a victory for the whole nation," said North Macedonia coach Igor Angelovski, whose side will make their European Championship debut this summer.

Germany are level alongside North Macedonia in a section led surprisingly by Armenia, who won for the third time in as many games thanks to two late goals in a 3-2 victory over Romania.

Antoine Griezmann scored the only goal of the game in Sarajevo as France recorded a second away win in four days over Bosnia following their 2-0 success in Kazakhstan at the weekend.

After being held 1-1 at home by Ukraine in their opening game on the road to the 2022 finals in Qatar, France are now in a strong position at the top of Group D.

Turkey expects up to $25 billion in tourism revenues this year

Auto exports up by 40 percent in March
eMag invests over 1.5 million Euro in refurbishing head office