Paraglider flies with bike over Pamukkale 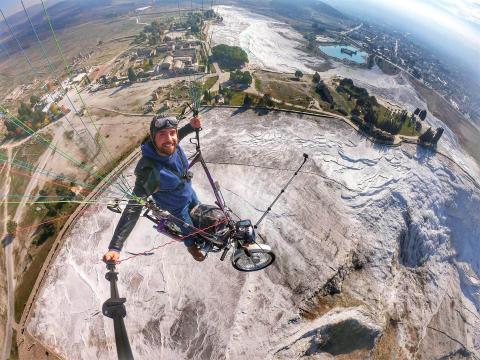 A professional tandem paraglider recently flew over the white thermal pools of the southwestern Pamukkale region with a motorcycle he tied to his parachute.

Hasan Kaval, who took off by riding the motorcycle attached to the parachute, recorded his flight with an action camera over the travertines for 20 minutes and landed in the Kocaçukur region.

He modified his motorbike by adding a propeller to the back of it which enabled it to travel both on land and in the air.

With the modification, he transferred the power from the motorbike to the propeller, providing a thrust force in the air which extended the flight time.

"My family told me to do my job, which is cook, but flying was something else entirely for me," he said, noting that he is enthusiastic about trying interesting things such as flying while playing backgammon and okey, a tile-based game, on the parachute and watching television on a sofa while paragliding.

With these interesting flights, he aims to contribute to the promotion of tourism centers and invites everyone to see Pamukkale especially by paragliding.

"I feel free and peaceful in the air like a bird. But at first, my family was very angry," he said adding that he gained their support when they saw his determination and success.

Pamukkale is a UNESCO World Heritage Site located in the Aegean province of Denizli and is famous for its mineral-rich thermal waters and white travertine terraces.