Spring is still on hold 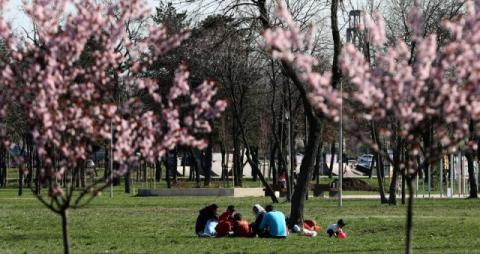 The temperature drop is expected over the weekend; the cool weather front will be followed by rain.

As announced by the Republic Hydrometeorological Service of Serbia, precipitation will be higher in the central and southern parts of Serbia, with the snowfall expected on the mountains.

Light morning frost throughout is expected on Sunday and during the next week, locally at a height of 2 m.
The lowest temperature will vary from 6 to 9 degrees, maximum from 10 to 18.
Cloudy weather with occasional rain with temperature drop is expected in Belgrade. Wind will be mild and moderate, from the northwest. Lowest temperature expected 8, highest 10 degrees.
On Sunday, mostly cloudy and chilly weather, with occasional rain, snow is expected in the mountains. During the night, in most places, the precipitation will cease with the sky cleared up.
Due to storms expected followed by thunderstorms, a yellow meteorological alarm is in force in the area of Kosovo and Metohija and Southeastern Serbia.
RHSS has also issued a special agrometeorological warning.
Patchy morning frosts are expected (ranging -3 ° C) at a height of 2 meters may lead to damage to flowering species and fruit varieties. The recommendation to agricultural producers is to be on standby and to follow the weather forecast, if needed to apply for adequate flower protection, RHSS stated.
The change of weather is coming to Europe again, and according to experts, we are experiencing a historical cooling. A strong cold wave from the Arctic should reach most of the Continent in the coming days, including the Mediterranean, the Iberian, and Balkan peninsulas, it was reported by the "Severe weather Europe" website.
The cold wave will first hit the United...