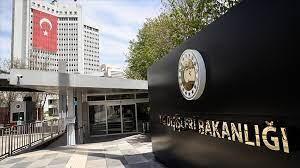 Turkey has appointed 13 ambassadors to foreign posts, according to the Official Gazette early on April 3.

A decree published with the signature of Turkish President Recep Tayyip Erdoğan said Cahit Bağcı was appointed envoy to Azerbaijan.

Fırat Sunel was appointed to India, Mehmet Munis Dirik will lead Turkey's diplomatic efforts in the Democratic Republic of Congo and Tugay Tuncer was named envoy in the United Arab Emirates.