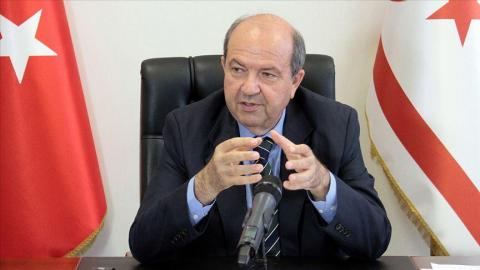 In a written statement issued on the anniversary of the launch of EOKA's armed attacks against the Turkish Cypriot people, Tatar said that the terror organization launched its attacks on April 1, 1955, to annex Cyprus to Greece, turning the island into a blood bath - marking the beginning of decades of pain and suffering.

He also maintained that following the establishment of the 1960 partnership Republic of Cyprus of which Turkish Cypriots were equal founding members, EOKA set out to implement the Akritas Plan, a covert plan to annihilate all Turkish presence in Cyprus.

"In December 1963, EOKA launched the 'Bloody Christmas' attacks in line with its plan to wipe out all Turkish presence from the island and to unite Cyprus with Greece. Again, hundreds of Turkish Cypriot villages were attacked between 1963 and 1974 and thousands of our people were displaced and forced to flee their homes," the statement read.

Against this background, the Greek Administration of Southern Cyprus's leader Nikos Anastasiades' remarks, which glorified the EOKA terror organization, are dreadful, Tatar...

Turkey wants a Cyprus that stands on its own feet: VP Oktay