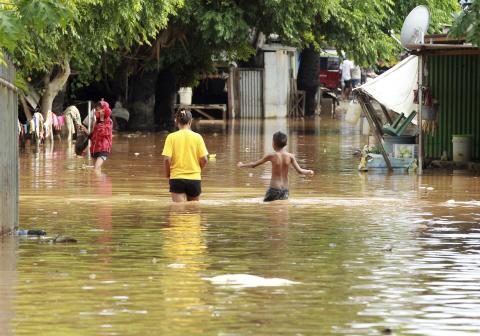 More than 75 people have died and dozens are still missing after flash floods and landslides hit Indonesia and neighbouring East Timor, officials said on April 5, turning small communities into wastelands of mud and uprooted trees.

Sparked by torrential rain, the deluge and subsequent landslides sent thousands fleeing into shelters as dams overflowed and their homes were submerged.

Mud and continued extreme weather have made it difficult for rescue workers to reach trapped survivors.

"There are 55 dead, but this number is very dynamic and will definitely change, while some 42 people are still missing," Indonesia disaster management agency spokesperson Raditya Jati told broadcaster MetroTV.

At least 21 people had also died in East Timor, said an official in the tiny half-island nation of 1.3 million that lies between Indonesia and Australia.

Many of the deaths were in Timor's inundated capital Dili.

In Indonesia's remote East Flores municipality, mud has washed over homes, bridges and roads, while strong waves have prevented search teams from accessing the hardest-hit areas.

On Lembata, an island east of Flores, parts of some villages were swept down a mountainside by torrents of mud and carried to the shore of the ocean.

Soon after flash floods began tearing into resident Basir Langoday's district in the early morning hours, he heard screams for help from a nearby home covered in rubble.

"There were four of them inside. Three survived but the other one didn't make it," he told reporters.

Langoday and his friends scrambled to try and save the trapped man before he was crushed to death.