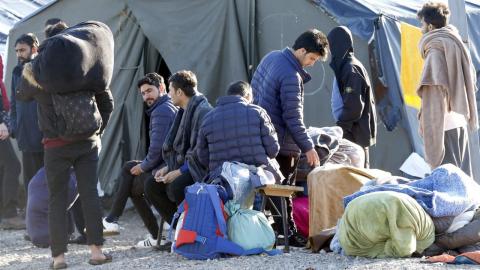 The UN Mission in Bosnia and Herzegovina on Monday condemned the Croatian police's allegedly violent pushback of a group of migrants trying to cross the border into the European Union country.

The UN mission said that on April 2, UN and NGO teams encountered a group of 50 men walking close to the border with Croatia in Una-Sana Canton in north-west Bosnia who had been subjected to physical violence.

"The men described that while crossing the border, they have been deprived of their belongings, including their mobile phones and money, and been beaten with wooden sticks while forcibly returned to the territory of Bosnia," the UN mission said in a statement.

According to the UN, the men were visibly exhausted, in need of clothes and shoes, and had injuries on their bodies. NGO medical teams provided urgent medical assistance to 25 of them.

"In violation of the prohibition of collective expulsion, pushbacks of migrants exiting Bosnia and Herzegovina have been regularly reported, including of families with children," the UN mission stated.

It added that in 2020, the UN's special rapporteur on the human rights of migrants expressed deep concern about "the repeated and ongoing disproportionate use of force against migrants in pushback operations".

"We urge the concerned states [Croatia and Bosnia] to investigate the incident that took place on the 2nd of April and for all perpetrators to be appropriately sanctioned," it urged.

She added that at the same time, the Border Police are short of at least 1,000 officers needed to adequately...