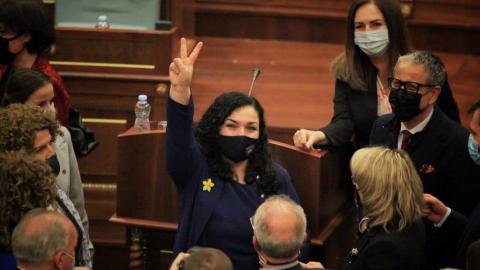 Vjosa Osmani became Kosovo's fifth head of state in 13 years since the country declared its independence from Serbia on Sunday night when MPs in the Kosovo Assembly voted to appoint her as president.

Osmani, a 38-year-old lawyer, also became the second woman to hold the post, after Atifete Jahjaga, who was president from 2011 to 2016.

The election of Osmani finalised the process of establishing governing institutions after the February 14 snap election which produced a landslide victory for Albin Kurti's Vetevendosje (Self-Determination) party, which won more than 50 per cent of the votes and them backed Osmani for the presidency.

Her election ended a deadlock in a parliament session which started on Saturday night but was interrupted because two initial attempts to hold the vote on the presidency failed because there wasn't a quorum. If she hadn't been elected, Kosovo might have faced another snap election.

"A major political crisis has been avoided. Failure to elect a president would have taken Kosovo into a cycle with many unknowns," Krasniqi told Pristina-based TV station Dukagjini on Sunday evening.

But the opposition Democratic Party of Kosovo, PDK, which boycotted the parliamentary session, claimed that as president, Osmani "will serve Kurti alone".

The PDK also alleged that Vetevendosje had caused "irreparable harm to the country's democracy" by taking all three of the state's most important positions - president, prime minister and parliament speaker - for the first time in Kosovo's post-independence history.

Who is Vjosa Osmani?