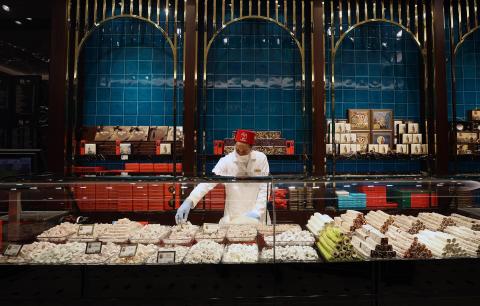 Hafız Mustafa, one of Istanbul's most famous confectioneries, continues its world-famous Turkish delight tradition with its 157-year-old recipe.

The sweetshop was established in 1864 by İsmail Hakkı Bey in the Bahçekapı neighborhood of Istanbul's Fatih district, where he started to make rock candy.

It swiftly became famous for its various kind of sweets and is now run by the Ongunlar family.

The confectionary serving sweets for 157 years and counting has never compromised on the quality of its sweets and has been loyal to its customary way of making its world-famous Turkish delight, baklava and other delicacies, according to the management.

Speaking to the state-run Anadolu Agency, Emre Ongurlar, a senior executive of the company, said Hafız Mustafa was traditional yet innovative.

"We use authentic recipes that we inherited from old times," he said, adding that they also aim to introduce new varieties.

Saying that the company regards itself as an ambassador of Turkey, Ongurlar said they were trying to keep the Ottoman culture alive through the decoration of their stores and staff uniforms.

Ongurlar said that Colombian writer Francisco Leal Quevedo, who wrote the book "Los Secretos de Hafız Mustafa" (Secrets of Hafiz Mustafa), will soon visit Istanbul, and his book will be translated into Turkish.

Staying loyal to its historical heritage, the company continues to produce its products according to old recipes while discovering new flavors.

The sweetshop produces 50 types of Turkish delight and 500 types of desserts and has 14 branches, one of which is in Dubai, the United Arab Emirates.

The Turkish delights and desserts in which sugar beets are used instead of glucose, natural root dyes instead of...