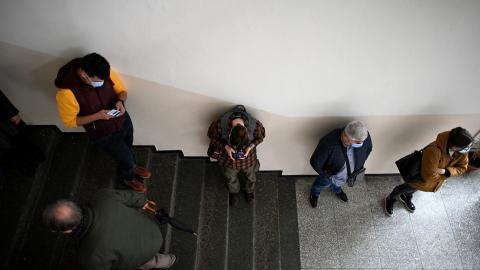 And contrary to expectations, voter turnout was not lower than usual, despite the pandemic, with long queues reported, particularly at polling stations abroad. By Monday afternoon, with 80 per cent of the ballots processed by the Central Election Commission, the notion of an election that could mark the upending of the status quo dominated by the GERB-BSP rivalry had become a reality.

In fact, an electoral insurgency has materialised in which a third of the seats in the next National Assembly will be taken up by parties that were not represented in the previous one, a feat not even seen in the elections during and after the 2013-14 protests.

In some ways, Sunday's elections had a slight echo of those of 20 years ago which saw the 'return of the king', when Simeon Sakskoburggotski won in a landslide and broke the post-communist electoral dynamics of the 1990s.

While the final vote count has not yet been completed, it is already possible to draw a few tentative conclusions from the elections, the results of which might draw Bulgaria into a period of protracted political instability or even turmoil, as it is yet unclear what kind of workable government could be formed based on the constellation of the next National Assembly.

A man passes in front of campaign posters of Slavi Trifonov's party 'There Is Such A People' (R) in Radomir, Bulgaria, 2021. Photo: EPA-EFE/VASSIL DONEV

The big winner of the night was political newcomer Slavi Trifonov, a famous singer, entertainer and TV talkshow host, and his party There is such a Nation, ITN, which took about one in five votes nationally (and one in three in the vote abroad).

Neither the pandemic or the protests of the past summer explain...