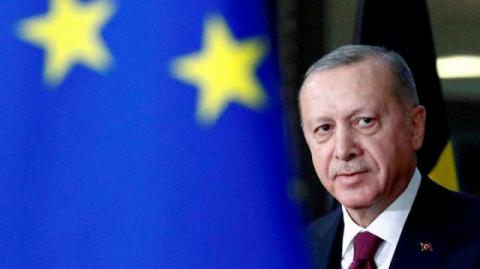 Years of disagreements over a growing list of issues threatened to boil over last summer when Turkey sent navy ships to support an energy exploration mission in waters claimed by EU members Cyprus and Greece.

Tensions cooled somewhat when Turkey withdrew the vessels and this year engaged in its first maritime talks with Greece since 2016.

The bloc pulled back from its threat to sanction Turkey as a result.

The Turks say they want to move forward from "positive" talks held in a series of calls to "concrete action" -- especially on migration.

But EU officials warn that any improvement depends on how Erdogan -- who was leader when Turkey formally opened talks to join the bloc in 2005 -- acts and whether he remains a constructive partner.

The possible thaw coincides with a toughening on Turkey from the White House, where the election of President Joe Biden saw Erdogan lose a personal friend in Donald Trump.

In a "carrot-and-stick" approach, the EU is dangling the possibility of updating the sides' customs union, visa liberalisation, providing more money for refugees and increased dialogue with Turkey on several fronts.

But an EU official insisted that Tuesday's meeting "will not be a moment of negotiations" but rather a chance for the sides to lay out their terms for improved ties.