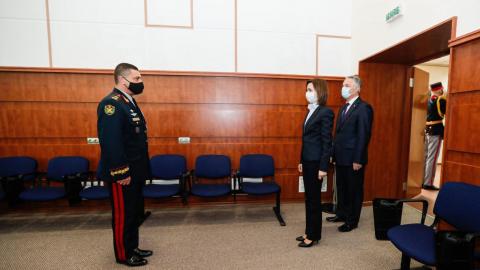 Moldovan President Maia Sandu asked the Moldovan Information and Security Service, SIS, and the police on Monday to urgently investigate how a Ukrainian judge who was in hiding in the capital Chisinau was abducted at the end of last week from the city centre.

Photographs allegedly showing the judge, Mykola Chaus, after having apparently been beaten up, were posted on Monday evening on Telegram.

His lawyer Iulian Balan could not definitively identify the judge from the pictures, but said that it might be Chaus.

In August 2016, Chaus was caught in Ukraine receiving a bribe of $150,000. During searches of his house, Ukrainian authorities found money, allegedly from bribes, hidden in glass jars in the garden behind his house.

Chaus then surrendered himself at a police station in Chisinau in March 2017, saying that he had illegally crossed the border into Moldova.

The reported kidnapping of Chaus came after the Supreme Court of Justice on March 3 rejected his request for a presidential decision that denied his petition for political asylum in Moldova to be reversed.

The Moldovan SIS denied any involvement in the reported kidnapping.

"This institution categorically denies and firmly rejects these insinuations and interpretations. We reiterate that the Service carries out its duties in strict accordance with the legislation in force and with respect for human rights, including for foreign nationals on national territory," the SIS said in a statement.