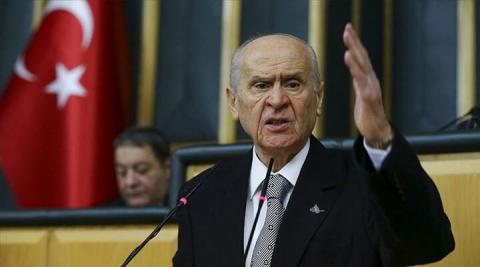 The Montreux Convention is a red line for Turkey that guarantees peace and stability in the Black Sea, the Nationalist Movement Party (MHP) leader said on April 6.

"First of all, I would like to say that Montreux Convention signed in 1936 is a component and inseparable part of the Treaty of Lausanne," Devlet Bahçeli told his party's parliamentary group in the capital Ankara.

"At the same time, it is our red line which guarantees peace and stability in the Black Sea," Bahçeli said.

"Moreover, there is no one in Turkey who opens the Montreux Convention for discussion or calls for abolishing it."

The Treaty of Lausanne - signed by Turkey on one side and Britain, France, Italy, Greece and their allies on the other in 1923- recognized the modern Turkish state.

The Montreux Convention was signed in 1936, which gives Turkey control over its straits and regulates the transit of naval warships.

Bahçeli condemned Sunday's statement by some retired admirals on the Montreux convention.

"104 retired admirals who were enslaved ... secret ambitions are a black stain in the history of the Turkish democracy," he said.

The MHP leader was of the view that the admirals committed a crime with their statement, saying: "This crime cannot and will not go unpunished."Bahçeli said it was a call for a coup. "This statement violates the law, and [it's] a weapon directed at the national will."

On Sunday, the ex-admirals posted a statement online urging against anything that could make the 1936 Montreux Convention the subject of debate.

Prosecutors in the capital Ankara subsequently started an investigation into the men behind the statement.

The controversial statement also denounced alleged "efforts" to show the...

Mitsotakis from the “Iniohos” exercise: We are not naive before the new threats we face (photos)