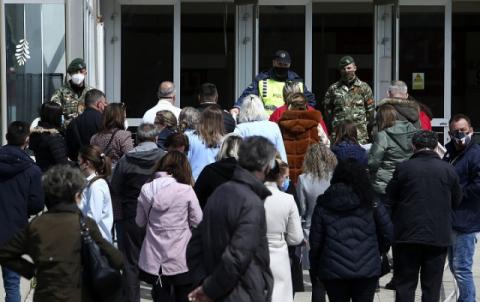 A curfew is introduced in the Republic of North Macedonia from today until April 20, and all dining facilities will be closed, Skopje editions reported. At a press conference, Prime Minister Zoran Zaev announced that the curfew will start at 8 p.m. and last until 5 a.m., and restaurants will be closed for the next two weeks.

The measures were adopted at the request of the Coordination Crisis Centre, which insisted that the government immediately responds to the deterioration of the epidemic situation as the third wave of the pandemic in North Macedonia is surging.

Prime Minister Zoran Zaev expects the talks with Bulgaria to continue after the formation of the government in Sofia in the spirit of friendship, good neighbourliness and cooperation and in accordance with the Treaty of Friendship signed in 2017, the media in Skopje reported.

First, let me congratulate the Bulgarian people on the successful elections in view of the current, most severe wave of the pandemic. Of course, congratulations to Mr. Borisov on the victory, I wish them wisdom in the negotiations to form a government, in the best interests of their people, Zaev told reporters. We will wait for a government to be formed to continue bilateral discussions in the spirit of friendship, good neighbourliness and cooperation, in accordance with the Friendship Treaty of 2017, the Prime Minister added.

The Sloboden Pecat newspaper commented that the post-election situation in Bulgaria is bad news for Skopje.

"First, the very formation of a government is uncertain and perhaps good news is that the entry into parliament of the nationalist Karakachanov hangs by a thread, but the bad news is that now the second most powerful political formation, Slavi Trifonov's party has...