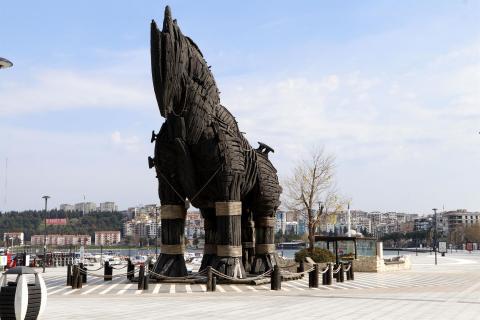 Pandemics throughout history have determined the fate of some wars, one of which was the Trojan War, an archaeology academic has said.

Excavations in the ancient city of Troy have been continuing in the northwestern province of Çanakkale as the world has been fighting against the coronavirus pandemic for more than a year.

Aslan said pandemics have been determinant factors in the fate of some wars since ancient times. Stating that pandemics during wars are one of the most discussed issues in ancient history, Aslan said that the Hittite Empire, one of the superpowers of the period, suffered from these epidemics many times and dealt great damage.

A pandemic in antiquity destroyed Assyria in 765 B.C., said Aslan, adding that the Persian King Kserkesin, who campaigned the Western Expedition in 480 B.C., left behind soldiers who died due to the pandemic while passing through Thrace and Macedonia, before having to return.

He said that a well-known example of a pandemic during a war was at the time of the Eastern Campaign of Alexander the Great.

"In 334 B.C., after the famous battle in Granikos Plain, Alexander the Great defeated the Persian army near Biga in Çanakkale. According to historians, Alexander the Great then visited Troy and continued his Eastern Campaign, taking Achilles' weapons from the Temple of Athens. After conquering all the cities and defeating all...

Greece opens to tourists from Serbia