Turkey’s wetlands in danger due to illegal waste disposal 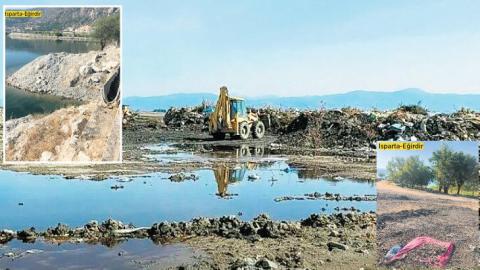 Turkey's wetlands, home to hundreds of species and protected by the Ramsar Convention, are in danger of extinction due to the illegal dumping of waste collected from excavation sites into wetlands, according to environmental experts.

Experts say that excavation and waste disposal to the wetlands have increased during the pandemic, especially on the days of curfews implemented to limit the spread of the new COVID-19.

Warning that the value of water should be taken into account, experts drew attention to the need to put an end to waste from excavation sites from being dumped into wetlands.

Some environmental organizations launched a campaign last week when it was revealed that the Akçay Marshes, one of the important wetland ecosystems of the northern Aegean region, among several others, were being used as an excavation waste disposal site by Balıkesir Municipality for about a year.

In a joint statement they made, 37 environmental organizations asked for the area to be rehabilitated by urgently stopping the dumping of rubble into reeds that hosts 30 percent of 487 bird species, critically endangered eels and hundreds of plant species recorded in the country.

The Balıkesir Municipality's use of Akçay Marshes as an excavation waste disposal area is against both the law and the Ramsar Convention to which Turkey is a party, according to the statement.

Speaking to daily Milliyet, Osman Erdem, the head of the Sensitive Ecosystems and Protected Areas Department and member of the Nature Research Association, criticized local authorities, stating that the municipalities have dumped waste materials from excavations into wetlands when they should have been protected under the Ramsar Convention instead.

Delphi Forum- EBRD President: “For us Greece is a success story”