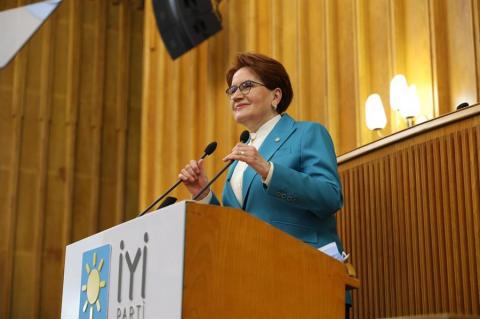 İYİ (Good) Party leader Meral Akşener on April 7 reiterated her criticism towards a declaration by 104 retired admirals, saying that the statement worked for the government to divert public attention from problems of the country.

"The government was freed of talking about the problems of the nation thanks to the coup literature," Akşener said, addressing her party members at the parliament.

She stated that nobody was talking about the bill on security investigation for public employees, a proposal which was rejected by opposition votes initially at the parliament but then was brought again for a revote at the request of the ruling Justice and Development Party (AKP).

"Again, the plight of tradesmen, farmers, and unemployed people is not being spoken. Our people are waiting for vaccination; the number of cases that peaked is not being discussed," Akşener said.

She stressed that those who are concerned for Turkey must express duly. "Those who have served their country for years must act more responsibly," Akşener said.

The meeting produced what would...