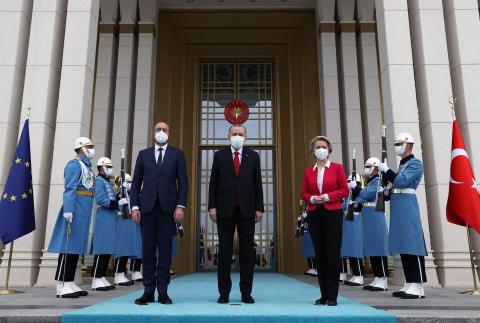 "The talks took place in a generally positive atmosphere and Turkey-EU relations were discussed thoroughly at the meeting," Kalın said in a statement late on April 6.

"Mr. President, putting forth his perspective on the future of Turkey's relations with the EU and Turkey's EU accession process, said the ultimate goal is full membership," Kalın added.

"It was stated that the EU should take concrete steps to support the positive agenda in the meeting where the issues of updating the immigration agreement, the renewal of the customs union, and the granting of visa liberalization for Turkish citizens, inter-public contacts and high-level political consultations were brought to the agenda," according to the statement.

The improvement of the political, economic and social ties between Turkey and the EU will contribute both to the stability of Turkey and the European states and to sustaining global peace, the spokesperson said.

"At the meeting, it was emphasized that the refugee problem should be handled with a sense of shared responsibility and the need for urgent renewal of the immigration agreement against the instability and humanitarian crisis to be created by a new refugee wave in the region was reminded," Kalın said, adding that cooperation in the fight against terrorism was essential to achieve permanent stability and...