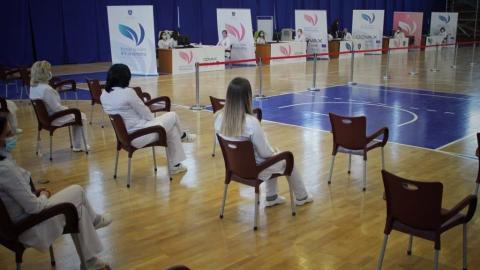 An opposition Kosovo MP has called on the Prime Minister of Albania, Edi Rama, to open vaccination centres for Kosovo citizens at a time when Kosovo has one the lowest COVID vaccination rates in Europe.

"I want to be vaccinated with any vaccine that my Albanian compatriots are being vaccinated with. And like me, there are many in Kosovo [who want it]," Xhavit Haliti, an MP from the Democratic Party of Kosovo, PDK, said on Tuesday on Facebook.

His call comes two days after Kosovo's new Minister of Health, Arben Vitia, said the Kosovo authorities had turned down an offer from Albania to vaccinate Kosovo teachers.

Kosovo has one of the lowest vaccination rates in Europe, with only 24,000 doses received so far via the COVAX mechanism. These are being used for health workers and for people over 80. The government says it is trying to purchase other vaccines.

In recent weeks, Albania has turned its attention to Russian vaccines, with PM Rama announcing on April 5 that he had reached an agreement to obtain 50,000 more doses of Russia's Sputnik vaccine, two weeks after receiving a donation of the same from the United Arab Emirates, UAE.

Minister Vitia confirmed that Kosovo had received a "generous" offer from Albania's Prime Minister to vaccinate teachers, weeks after around 500 Kosovo healthcare workers were vaccinated in Albania. But he cited legal constraints behind the refusal.

"Unfortunately, Albania has run out of Pfizer and AstraZeneca vaccines so there are only the [Chinese-made] Sinovac. Even if we would like to, laws prohibit us from importing products that are not registered by EMA [European Medicine Agency]," Vitia added.

PDK MP Haliti was not convinced by this justification, and blamed the lack of vaccines in...