Signs Appear that Poland Might Try to Restrict Divorce 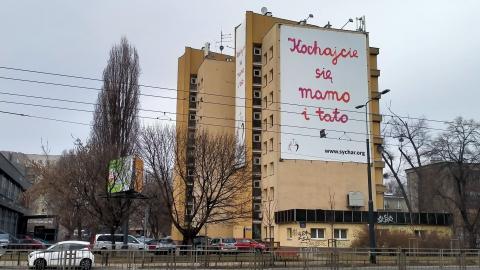 Banning divorce might seem like an outlandish idea for a country in the 21st century that is situated in the heart of Europe. But after five years under the right-wing populist government of Law and Justice (PiS), during which moves have been made to withdraw from the Istanbul Convention to combat domestic violence, to create LGBT-free zones and to target women's groups who disagree with it, most Poles know better.

"I bet that the divorce ban will make it into the Sejm later this year," feminist scholar Agnieszka Graff, one of the country's most astute observers of the ultra-conservative movement, wrote in an opinion piece in Gazeta Wyborcza in late February.

Who's behind the billboards?

Apart from the main slogan, there is only one other bit of information on the billboards: the listing of a website of Sychar, a Catholic organisation focused on venerating and preserving religious marriage.

"The aim of our community is to save sacramental marriages which are in crisis, at every stage of this crisis, even after divorce," Andrzej Szczepaniak, leader of Sychar, tells BIRN. "In the Catholic Church, sacramental marriage is sacred and indissoluble."

Essentially, the group does not recognise the fact that civil divorces trump religious marriages. "Our goal is to find ourselves, after death, in Heaven with our spouses," Szczepaniak says.

In groups centred around nearby churches, in Poland and abroad, Sychar members support one another in a process of self-development, with the stated goal of "learning true love, modelled on God's own love for man". For instance, with the COVID-19 pandemic raging in Poland, members of the community have been taking part in daily prayers online, listening to podcasts recorded by...