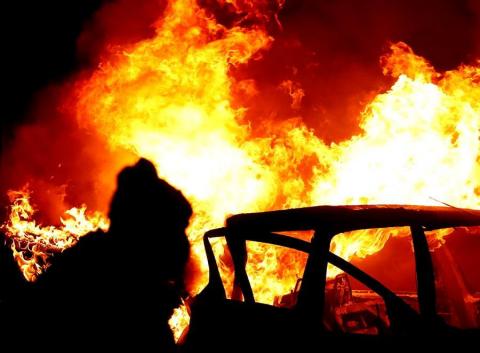 Britain's prime minister has condemned another night of violence in Northern Ireland, after crowds threw petrol bombs and a bus was set on fire in Belfast.

The violence follows a week of rioting which some have suggested is the first evidence Brexit turbulence may be boiling into unrest in the British province, where post-EU rules are stoking fury among pro-U.K. sections.

Crowds gathered at Lanark Way in Belfast "where a bus has been set on fire", the Police Service Northern Ireland confirmed, advising people to avoid Springfield and West Circular roads.

"The way to resolve differences is through dialogue, not violence or criminality," PM Boris Johnson tweeted late Wednesday.

He added he was "deeply concerned" by the scenes.

A set of gates on the Lanark Way peace line - walls separating nationalist and unionist groups - were also set alight, according to the BBC's Northern Ireland correspondent.

"Crowds of a few hundred on each side throwing petrol bombs over in both directions," she said in a tweet.
She added a local priest had attempted to stop the violence: "They all greeted him with a friendly 'hi father', then returned to hurling missiles."

The BBC said the arrival of police cars mostly halted the violence.

First Minister Arlene Foster said: "This is not protest. This is vandalism and attempted murder. These actions do not represent unionism or loyalism."

Unionist paramilitaries, British security forces and armed nationalists - seeking to unite the territory with the Republic of Ireland - waged battle...