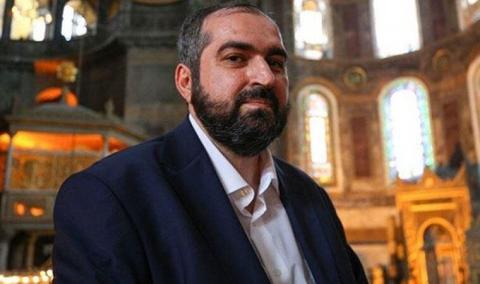 The imam at Istanbul's iconic Hagia Sophia mosque announced on April 8 he is stepping down from his duties to return to academic studies.

Mehmet Boynukalın, whose assignment at the nearly 1,500-year-old Hagia Sophia was temporary, asked to leave the post, and his request was accepted.

He will continue his academic career at Marmara University Theology School, also located in the Turkish metropolis.

"Another reason for the decision I took was to avoid illogical conversations by making false comparisons such as 'the imam of the Hagia Sophia speaks, so why shouldn't we?' regarding the [retired admirals] declaration published recklessly against the national will," he said in his statement.

Boynukalın has served at the mosque alongside two other imams since last July, when Hagia Sophia returned to its status as a mosque, under the authority of Turkey's Religious Affairs Directorate.

In 1985, Hagia Sophia was added to the UNESCO World Heritage List.

Besides being a mosque, the Hagia Sophia is also among Turkey's top tourism destinations and remains open for domestic and foreign visitors.