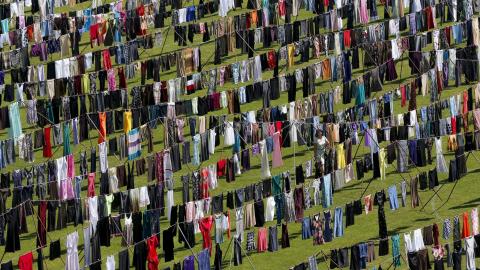 "There were 11 or 12 other women in the two houses but I did not recognise them," she said. The fact that she did not know the other female victims' names turned out to be crucial many years later when she was trying to prove what happened to her.

Sadije said she was detained for three days and systematically raped by two soldiers and one police officer.

"One of them, a policeman, was a bit fat and brown. They called him Commander," she recalled.

When the police officers dragged her violently to a storehouse to rape her, her left leg was injured, and three months later, after the Kosovo war was over, she underwent surgery. However, she continued to suffer pain in her leg and in 2007 she had to undergo another operation.

In February 2018, the Kosovo authorities began receiving applications for the status of survivor of wartime sexual violence. Being granted this status not only bestows official recognition of a victim's suffering, but also makes them eligible for benefits such as monthly payments of 230 euros.

Since it started work, the government's Commission to Recognise and Verify Survivors of Sexual Violence during the Kosovo War has received more than 1,220 applications, and more than 900 of these applicants have been granted the status of wartime victim of sexual violence.

But 222 applicants have been rejected, and Sadije was one of them.

Fidgeting constantly in her chair and pausing twice to cry, Sadije said that the interview with the verification commission was embarrassing for her.

"They asked me more about my financial situation [than the assault]. They didn't let me talk much," she said.

She said she was made to feel like she was "cheating" the commission.