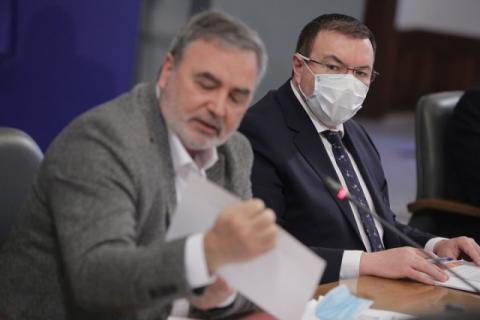 We are reporting first steps towards the end of the third wave with very fragile trends for the decline in morbidity, but it is a clear and distinct trend, Health Minister Kostadin announced at a traditional briefing on Thursday.

As regard hospitals bed occupancy, Prof. Angelov said that 74% of those for patients without complications on a national basis are occupied. The occupancy of intensive care beds is 64%, but the health authorities report a downward trend.

The current morbidity rate in Bulgaria on 14-day basis is 635 per 100,000 people, which ranks the country 9th in the European Union and 4th in the Balkans. In terms of mortality, we are 2nd in the EU after Hungary and 2nd in the Balkans after North Macedonia.

"As for the caseload within the country - we have several regions with over 700 coronavirus cases per 100,000 people. For the past 14 days Sofia is first, followed by Varna, Pernik, Burgas, Ruse and Sofia region. With the lowest morbidity are Razgrad, Vidin, Kardzhali, Targovishte, Veliko Tarnovo and Gabrovo", announced the Chief State Health Inspector Assoc. Prof.Angel Kunchev.

Housing Prices in Bulgaria Soared by 30 Percent over Decade – Eurostat
Selection of teenage artists for European "Liberty" project, carried out at "Radu Stanca" theatre in Sibiu