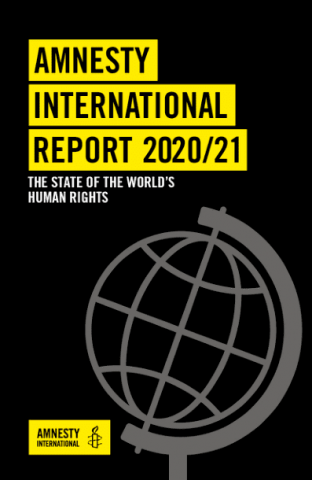 Ljubljana – Amnesty International says in its latest human rights report that Slovenia denied asylum-seekers access to asylum in 2020, while forcibly returning migrants to Croatia. The country is criticised for limiting freedom of assembly during the pandemic, handling Covid infections at care homes inadequately, and failing to resolve Roma issues.

“In 2020 in Slovenia, we witnessed the consequences of poor past decisions, as well as new attacks on human rights, including under the disguise of a fight against Covid-19,” Amnesty International Slovenia director Nataša Posel said in a written statement as the report on human rights in 149 countries worldwide was released on Wednesday.

The report says that asylum-seekers unlawfully entering Slovenia continued to be denied access to asylum and were forcibly returned to neighbouring Croatia, which is against the principle of non-refoulement.

It also says that asylum-seekers were detained under inhumane conditions in the Centre for Foreigners in Postojna, some before being deported to Croatia, where police were reported to be abusive against them.

The report notes the government adopted changes to the laws on foreigners and international protection to further restrict asylum-seekers’, refugees’ and migrants’ access to protection, some of which were already passed in parliament in March 2021.

Posel meanwhile stressed that for most of last year, a blanket ban on public assembly was in place in Slovenia, which is not in line with international standards. She believes every event should be assessed on a case-by-case basis to allow for proportionate restrictions.

Also during the pandemic, the Health Ministry was criticised during the first wave in spring for deciding not to hospitalise care home residents, which the report says may have deprived some of hospital care.

Posel said that despite many appeals, the government has not launched a systemic oversight of those involved in triage of non-infected care home residents in the first wave, while it also failed to prepare the country for the second wave.

The report notes that care home residents accounted for almost 60% of all Covid deaths, while it hails the ministry’s announcement of long-term care legislation.

It points to the European Court of Human Rights ruling that Slovenia had not violated the rights of two Roma families by failing to ensure access to water and sanitation, which Posel regretted. She said the court largely overlooked obstacles to access to basic services, which keeps many Roma in the south-east marginalised.

The last issue the report highlights is violence against women for lack of progress in the definition of rape in the criminal code, but Posel welcomed the good news coming at the start of 2021 as parliament is expected to pass a bill to change the definition by introducing the only-yes-means-yes principle.