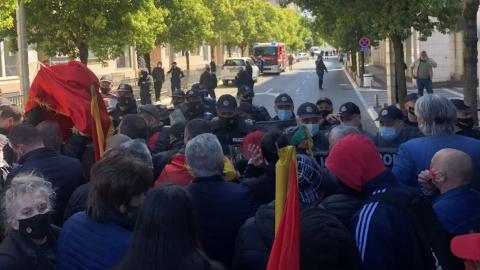 The proposed law would give people with permanent residence permits the right to vote and apply for citizenship. But protesters waving Montenegrin flags and chanting slogans against the new government accused the government of betraying national interests.

Prime Minister Zdravko Krivokapic said the law would be adopted in the end despite the protests, accusing President Milo Djukanovic of encouraging his political supporters to destabilize his government and the country.

"Djukanovic should call on his supporters to stop the protests because they will not stop the rule of law. Citizenship law liberalization will be adopted in the interest of the country and its citizens, no matter the protests," Krivokapic posted on Twitter.

Under current, law, people living in Montenegro with temporary residence documents don't have the right to vote or own property. The law says citizenship may only be granted to a person who has had legal residence in the country for over ten years - and has renounced the citizenship of another country.

Children born in Montenegro may only obtain citizenship if one of their parents is a Montenegrin citizen or if they renounce another country's citizenship after the age of 18.

Under the government proposal, people with permanent residence permits can apply for citizenship, but would have to give up citizenship of another country first.

According to Interior Ministry data, more than 64,000 foreign citizens are living in Montenegro - but only 468 of them have applied for citizenship.

The ministry says 30,930 of these people have permanent residence permits, having lived in Montenegro for...

Youth and digitalisation in focus of Adriatic-Ionian conference