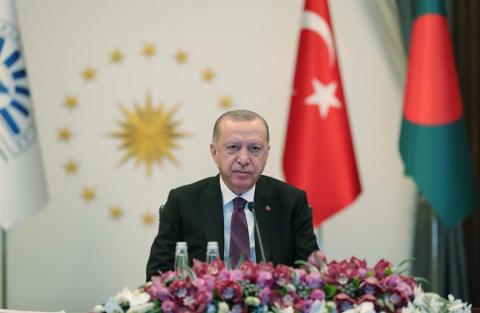 President Recep Tayyip Erdoğan has urged members of the D-8 Organization for Economic Cooperation to trade in local currencies while promoting the idea of an Islamic megabank to meet the liquidity requirements of Islamic financial institutions as well as financing for infrastructure projects.

"We must focus on trading in local currencies to protect our countries from risks based on foreign currencies," he said, addressing a meeting of the D-8 developing nations via video link.

Erdoğan recalled his proposal for trade in local currencies at the D-8's 2017 Istanbul summit, saying that the developments over the last four years proved the idea was sound and trustworthy.

"We have to focus on high-technology and high value-added production in order to achieve strong and sustainable growth rates," he stated.

He said that it was of great importance that the D-8 Preferential Trade Agreement was put into effect by all member countries as early as possible.

Erdoğan said Turkey tried to strengthen the organization and to further develop regional cooperation as its priorities during his presidency.

"Today, it is also determined by the Bangladeshi brothers and sisters hitting 'Converter Cooperation for a world: The Youth and Technology Power' that we have gathered under the theme of 'making use of.' The D-8 population of over 1.1 billion, mostly young people, is our most precious wealth," he added.

The D-8 Network for Research and Innovation is critically important, as it enables information sharing between universities and other institutions in fields such as renewable energy, artificial intelligence, robotics, the internet of things, big data, blockchain and nanotechnology, Erdoğan stated.