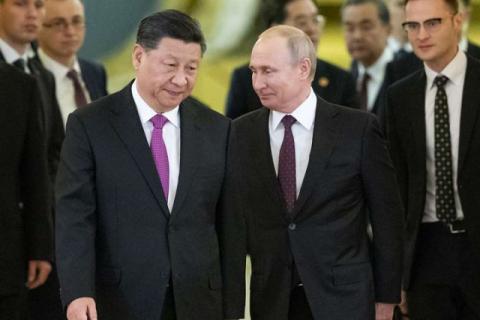 They're not leaders for life — not technically, at least. But in political reality, the powerful tenures of China's Xi Jinping and, as of this week, Russia's Vladimir Putin are looking as if they will extend much deeper into the 21st century — even as the two superpowers whose destinies they steer gather more clout with each passing year.

What's more, as they consolidate political control at home, sometimes with harsh measures, they're working together more substantively than ever in a growing challenge to the West and the world's other superpower, the United States, which elects its leader every four years.

This week, Putin signed a law allowing him to potentially hold onto power until 2036. The 68-year-old Russian president, who has been in power for more than two decades — longer than any other Kremlin leader since Soviet dictator Josef Stalin — pushed through a constitutional vote last year allowing him to run again in 2024 when his current six-year term ends. He has overseen a systematic crackdown on dissent.

In China, Xi, who came to power in 2012, has imposed even tighter controls on the already repressive political scene, emerging as one of his nation's most powerful leaders in the seven decades of Communist Party rule that began with Mao Zedong's often-brutal regime. Under Xi, the government has rounded up, imprisoned or silenced intellectuals, legal activists and other voices, cracked down on Hong Kong's opposition and used security forces to suppress calls for minority rights in Xinjiang, Tibet and Inner Mongolia.

Xi has sidelined rivals, locked up critics and tightened the party's control over information. An ongoing crackdown against corruption has won popular support while also keeping potential competitors in line.

The number of dead is rising, the peak of the infection is approaching, WHO to react

Dalai Lama is Admitted to Hospital