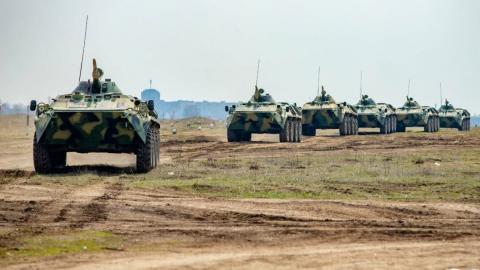 Moldovan Defence Minister Victor Gaiciuc told BIRN that his country was not worried about Russian military exercises in the breakaway region of Transnistria in the context of the recent Russian reinforcements near the Ukraine border.

Military manoeuvres by the Operational Group of Russian Troops, OGRT, in the breakaway region of Transnistria - while Russian troops are also mobilising on the eastern border of Ukraine - have caused jitters internationally.

On Wednesday, the OGRT soldiers carried out the final stage of their combat preparations. "The servicemen have worked out their skills for an offensive battle. They performed stealth manoeuvring exercises and hit targets," the Russian Defence Ministry said.

The combat exercises scenario included the destruction of armoured vehicles and low-flying vehicles of an imaginary enemy. According to the scenario, during the offensive battle, the enemy disabled one unit of armoured vehicles. Repair unit specialists then moved to the damaged combat vehicle and evacuated it.

A Moldovan military and security expert, Rosian Vasiloi, told BIRN that seven OGTR military exercises took place in Transnistria since the beginning of this month alone. "These exercises include the interoperability of troops at platoon level, the platoon's...

BBC: What Does Bulgarian Arms Dealer Have in Common with 2014 Explosions in Czech Republic?

Ukrainians urged to vacation in Turkey after Russia’s travel ban

Russia Expels 10 US Diplomats in Response to US Moves