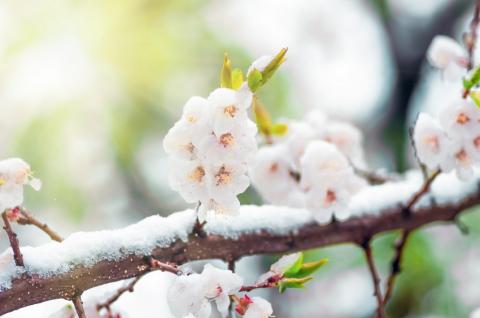 Ljubljana – Slovenia woke up to an unseasonably cold morning on Wednesday with temperatures dipping into the 20s below zero in the south of the country in what is the coldest April morning on record.

The lowest morning temperature, -20.6 degrees, was recorded in Nova Vas in southern Slovenia, the lowest April temperature on record, and trailed closely by -19.8 degrees in nearby Babno Polje, the site of the previous all-time April record low from 1970, said the Environment Agency (ARSO).

All ARSO measuring sites recorded sub-zero temperatures this morning except for Markovec on the coast where the mercury showed 1.3 degrees. Kočevje in the south-east saw -13 degrees, Celje -5, Ljubljana -4 and Sečovlje on the coast -2.

In a number of areas this was the coldest start to a day in April in the past 70 years, but it could well be the mercury dropped to its lowest in more than a hundred years, ARSO said.

In Postojna, Nova Vas and Babno Polje, Wednesday’s morning was also the coldest this winter, show fresh data. “Never before has the lowest temperature of the winter season been recorded in April, that’s extremely rare even for March,” ARSO said.

Due to fog and low cloud during the night, the capital Ljubljana did not record an all-time April low but it still experienced the coldest April morning since 1956 when the area was much less urban, ARSO noted.

The temperatures are believed to have severely affected fruit trees in particular, since most orchards were in full bloom. The extent of the damage will be clear later and depends on a number of factors, including the type and condition of fruit trees and the location of orchards.

The outlook for Thursday is for another frosty morning.