‘Istanbul’s Bosphorus under risk due to global climate change’ 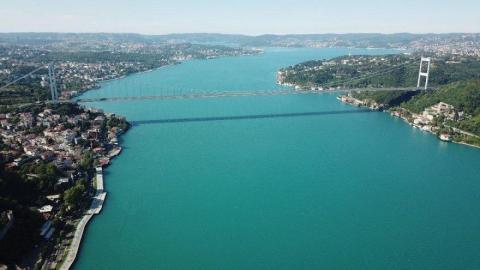 With the possibility that the sea level in Istanbul's Bosphorus Strait might rise by 3 to 5 meters, there are fears that buildings along the strait's shore might submerge if the temperature increases by 3 degrees Celsius by the end of the century, according to a parliamentary report.

The Global Climate Change Research Commission of the Turkish parliament convened under the chairmanship of the ruling Justice and Development Party's (AKP) Afyonkarahisar deputy, Veysel Eroğlu.

Speaking at the meeting, Birpınar underlined that the average temperature around the world was gradually increasing.

Birpınar pointed out that ice masses on the land melted due to the increasing temperature and that there was a rise in the sea level because of this.

"If temperature increase by 3 degrees Celsius by the end of the century, sea level will rise to five meters," Birpınar said, adding that a situation could arise where many island countries could disappear, and coastal countries would be inundated.

"If this [scenario] is realized, the sea level in the Bosphorus will also rise, making the other buildings far from the shore appear as waterside mansions," he added.

Pointing out that Turkey has prepared the regional climate change action plans, Birpınar noted that within this framework, a separate regional action plan was prepared for each of Turkey's seven regions.

He added that these plans were made in coordination with the United Nations...