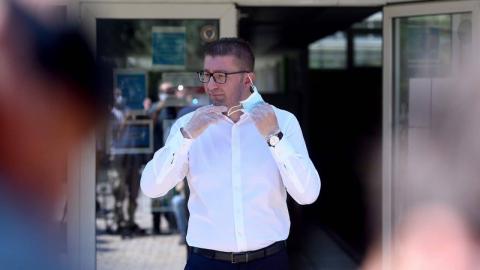 The head of the main opposition VMRO DPMNE party in North Macedonia, Hristijan Mickoski, told Alfa TV on Thursday that since his party revealed a passport forgery scam involving the police, he and his loved ones had received grave threats.

"I do not know if the mafia is threatening [us] or not, but strange phone numbers are sending various messages, strange people are approaching, [and were are getting] strange emails, strange letters, in the past few days. Some phone numbers are from some neighbouring countries, like Russia, etc.", Mickoski explained.

He said the threats would not deter him from what he claimed was his ongoing quest to reveal the connections between North Macedonia's Social Democrat-led government and the mafia.

The Interior Ministry on Friday said that "it takes all reported threats seriously", and will investigate the matter.

Just one day after the opposition briefed reporters about the passport forgery scam, police on Tuesday carried out a bust, arresting nine police officers allegedly involved in issuing more than 200 fake passports to foreigners and wanted criminals from the region for an alleged fee of 20,000 euros each.

Meanwhile, the government and opposition remain locked in an exchange of accusations over the case.

The government insists the opposition prematurely exposed a major investigation, jeopardising an international crime busting operation that had lasted some 24 months. The opposition insists that the busts would never have happened if they had not gone public with the affair.

The opposition also insists that only "small fish" have been arrested, and that the criminal ring could not have operated without the knowledge and patronage of Prime Minister Zoran Zaev and Interior...

"If the withdrawal of KFOR is requested..."