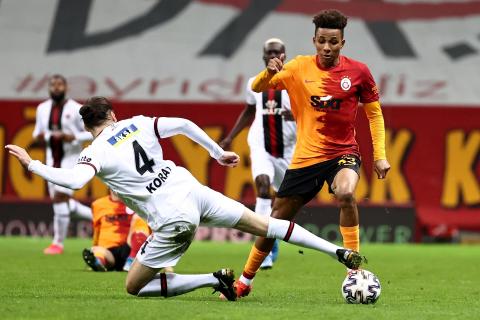 Galatasaray on April 10 disappointed fans with a 1-1 home draw in a Turkish Süper Lig match against Fatih Karagümrük as the Lions' hopes for a local title are fading rapidly.

Egyptian forward Mostafa Mohamed scored in the ninth minute but the goal was disallowed because the Lions' Dutch forward Ryan Babel was whistled for a handball before the goal. The referee's ruling came after a Video Assistant Referee (VAR) review.

Fatih Karagümrük broke the deadlock in minute 59 when Senegalese winger Alassane Ndao followed a rebound by Galatasaray goalkeeper Fernando Muslera after a shot by Yannis Salibur's, giving the 1-0 edge to the visitors at Turk Telekom Stadium.

Three minutes later, Galatasaray had a quick response when Dutch forward Ryan Babel dribbled past his opponent in the penalty area and converted on a close-range finish. Portuguese midfielder Gedson Fernandes assisted making it 1-1.

Galatasaray defender Ryan Donk was sent off after a foul in the 79th minute and the Lions was down to 10 men.

In the 86th minute, Galatasaray was awarded a penalty kick as Turkish winger Kerem Aktürkoğlu was brought down in the penalty area. But after a VAR review, the referee canceled the penalty.

The game ended as Fatih Karagümrük bagged the draw.

Third-place Galatasaray has 62 points in 32 matches.

The Super Lig table is led by archrivals Beşiktaş, who racked up 67 points.