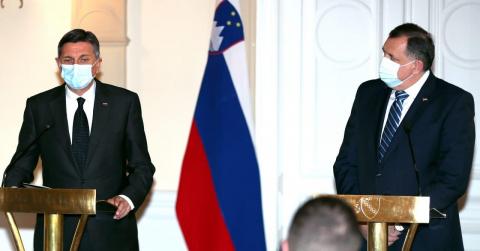 Slovenia's President, Borut Pahor, on Monday, denied calling for the dissolution of Bosnia and Herzegovina, saying he wanted Bosnia to join the European Union as soon as possible.

The announcement came after Bosnian media reported that Bosnian presidency member Zeljko Komsic said Pahor had asked the presidency members during his recent visit to Sarajevo if a "peaceful dissolution" of Bosnia was possible.

Komsic told Fena news agency that Pahor told the Presidency members that talk about the need to "finish" the dissolution of Yugoslavia are more and more often heard in Europe.

But Pahor's office said the President believed the exact opposite, and "regularly warns against ideas about the dissolution of Bosnia and Herzegovina and the redrawing of borders in the Western Balkans".

"In this context, out of concern about these ideas, he asked his interlocutors, all three members of the Presidency of Bosnia and Herzegovina, about that when he visited Sarajevo in early March," Pahor's office said.

Earlier on Monday, media also reported that earlier this year the Slovenian Prime Minister Janez Jansa had handed over a "paper" to the President of the European Council, Charles Michel, where he allegedly announced that one of the priorities of the upcoming Slovenian EU presidency would be "redrawing borders in the former Yugoslavia".