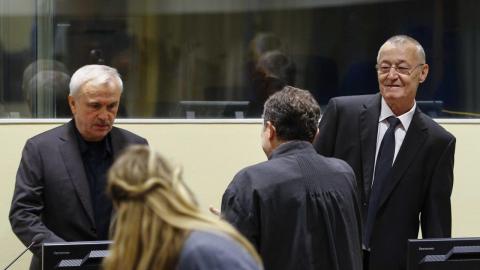 The defence teams of Jovica Stanisic and Franko Simatovic urged the International Residual Mechanism for Criminal Tribunals in The Hague on Tuesday to acquit both men of committing crimes during the wars in Croatia and Bosnia from 1991 to 1995.

Stanisic, the former head of Serbian State Security, and Simatovic, his former deputy, are being retried for alleged participation in a joint criminal enterprise along with Slobodan Milosevic and others whose aim was the forcible and permanent removal of the majority of non-Serbs, mainly Croats and Bosniaks, from large areas of Croatia and Bosnia and Herzegovina in the period from 1991 to 1995.

Stanisic and Simatovic are accused of establishing, controlling, financing and deploying paramilitary units that committed crimes in Croatia and Bosnia and Herzegovina.

But Stanisic's defence lawyer Wayne Jordash pointed out that "between 1991 and 1995, [State Security's] job was to process Serbian extremists and criminal gangs who threatened the security of Serbia".

According to State Security regulations, its operatives were expected to establish collaboration with such criminals within the country and abroad in order to gain information and intelligence.

Jordash argued that this meant that association with criminals cannot be the basis for a fair assessment of Stanisic's responsibility for their crimes.

Vladimir Petrovic, one of Simatovic's defence lawyers, said his client only met Slobodan Milosevic once, in Kula in Croatia in May 1997, after the war was over.

"That first and only meeting between Simatovic and Milosevic was in Kula at the celebration of the JSO [Serbian State Security Service's Special Operations Unit]; it was meeting of pure protocol where dozens of other people...