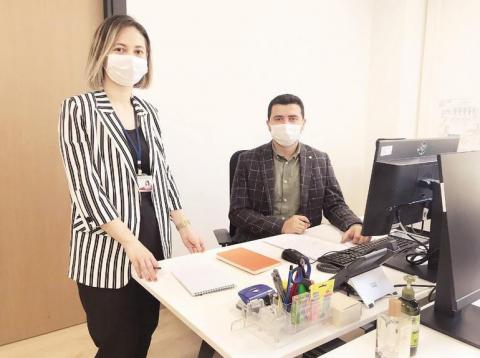 With preparation ongoing to commission the first reactor for the Akkuyu Nuclear Power Plant (NPP) in southern Mersin province in 2023, Turkish engineers, who received their training in Russia for more than six years, have started to work at the power plant.

While 35 graduates out of 50 Turkish engineers started their duties, 43 more graduates are expected to be employed this year.

As part of an agreement between the two governments, students from Turkish universities, mostly engineers, have been enrolling in training programs in Russia since 2011 to take jobs afterward at the Akkuyu Nuclear Plant, which is being constructed in the Mediterranean province of Mersin.

Abdullah Safa Duman, who completed undergraduate and graduate programs at the same university, is working as the chief expert of physical calculations in the nuclear security unit of the power plant.

Speaking to daily Milliyet, the duo gave information about the training they received in Russia and the future of nuclear energy in Turkey.

Noting that he was selected as one of the 50 people sent to Russia after clearing an exam in which nearly 9,000 people participated, Duman said that he completed a total of seven and a half years of training, one year of which was spent in the Russian language preparatory class.

Duman said that during the last two years of his education, he focused on his field and prepared a thesis, stressing that the difficult training he received in Russia was oriented towards practice rather than theory....