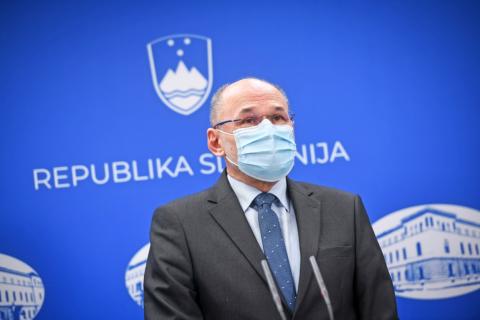 Kacin was asked on air Sunday night why Slovenia had not set up an effective nation-wide IT system allowing those who want to get vaccinated to register for a jab. The moderator also noted that some had gotten vaccinated simply by turning up at a vaccination site, while others could not get vaccinated despite having applied.

Kacin noted people started registering at the country’s one-stop-shop online portal eUprava in December after being called to do so by the government.

However, the Information Commissioner’s Office had issued a temporary injunction preventing this data to be sent to local health care providers, said Kacin. “This is an unreasonable decision, and it is impossible to work miracles until it remains so.”

Prelesnik said today that not her office but those in charge bore the full responsibility for the delays, having failed to plan an effective process of registration and implementation of the vaccination drive.

Prelesnik said Kacin was either “pretending ignorance or is actually ignorant of the problem, which are both rather concerning”. Delays in the vaccination drive are caused by inadequate quantities of vaccines, which has nothing to do with the injunction, Prelesnik said.

Her office found that the eUprava registration process misled citizens because it remains impossible to determine what users had achieved by registering – whether they only demonstrated interest in getting vaccinated or had actually been placed on a waiting list.

The office imposed the injunction, instructing the Health Ministry, the National Institute for Public Health (NIJZ) and the Public Administration Ministry to inform individuals about the use of their personal data in mid-March.

They have not done this until this day and those who registered can in no way rely on their registration, which Prelesnik believes is unacceptable.

She said that those in charge had failed to show respect for basic human rights, such as the right to fair and transparent processing of personal data, when designing the process.

The Information Commissioner’s Office found that public servants in charge of personal data protection within government bodies had raised issues but had been ignored by decision-makers.

Citizens have the right to know and the state must show them minimal respect by informing them how and where they can register to get vaccinated, said Prelesnik.

“Such important information should have been communicated by government representatives in a comprehensive and uniform manner. Instead we face new, contradicting and unclear statements by representatives of different bodies every day.”

Prelesnik also called into question the purpose of the eUprava vaccination registration as such, saying nobody had accessed the data by the time the injunction was issued, while relevant bodies continue to instruct people to register only with their GP.