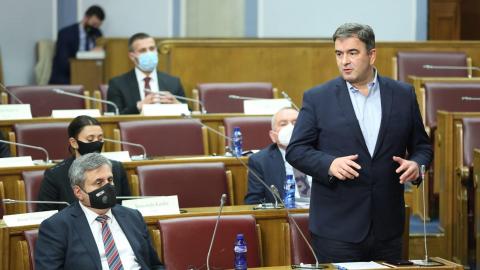 "There are public indications that the Montenegrin authorities supported Bosnian Serb forces, despite the former Federal Republic of Yugoslavia's embargo on the Bosnian Serb authorities," Medojevic said.

"By doing this, they directly supported military operations which resulted in the massacre of thousands of unarmed civilians in Srebrenica in July 1995," he added.

He argued that by launching an investigation, Montenegrin parliament could "make a historic contribution to the culture of war crimes condemnation". According to parliamentary rules, an investigation can be opened if more than half of MPs vote for it.

Medojevic, whose Movement for Changes party are part of the ruling alliance that ousted the Democratic Party of Socialists from office at elections last year, is a staunch opponent of Djukanovic.

His intervention comes after Serbian news website Vecernje Novosti on April 1 published a video of a Democratic Party of Socialists rally in 1996, in which Djukanovic claimed that his government had "secretly" supported the Serbs in Bosnia and Herzegovina "for years" because Serbian leader Slobodan Milosevic was not doing so.

Djukanovic has denied the allegations that he supported the Bosnian Serbs in the 1990s war. He told Montenegro's public broadcaster RTCG on Tuesday that the claims are false information spread by "people close to the Serbian secret service". Djukanovic was prime minister at the time of the Srebrenica mass killings, and Montenegro was still part of Yugoslavia.

The Movement for Changes' proposal for an investigation came in the midst of another political row connected to Srebrenica.