Opposition, coalition MPs on opposite banks over PPE procurement 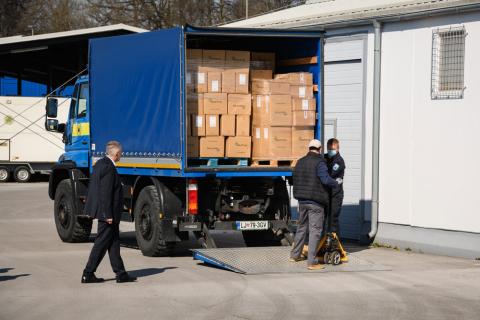 Ljubljana – Parliament debated Tuesday the Court of Audit’s recent findings about the efficiency of personal protective equipment (PPE) procurement during the Covid-19 epidemic last spring. Centre-left opposition MPs insisted there had been serious problems with the purchases, coalition MPs saw today’s plenary as a mere show for the public.

Speaking on behalf of the four parties which requested today’s session, Robert Pavšič of the opposition Marjan Šarec List (LMŠ) said the court’s report was much more than just an audit of PPE procurement procedures.

It revealed the government’s rampage when the epidemic broke out and exposed its understanding of power and its usurpation of rules and agencies, he said.

Economy Ministry State Secretary Simon Zajc said the recommendations the four parties had drafted for the government did not reflect the actual situation, missing the point.

The problem was the regulations not facilitating an effective assessment of the needs for PPE, while the government took over when the epidemic broke out, in an emergency, he argued.

Alenka Jeraj, an MP for the ruling Democrats (SDS), said warehouses had been empty when the government took office, with not enough PPE even for health workers.

Although the report also covers actions by the Marjan Šarec government, the proponents of the session ignored that, she said, adding the session was meant as “a show for the public”.

Soniboj Knežak of the opposition Social Democrats (SD) said that while the report said the government had been inefficient in going about PPE purchases, he wondered whether it had done it on purpose or out of negligence.

The LMŠ’s Brane Golubovič believes it acted in a disorganised way on purpose; he noted the Court of Audit had forwarded 13 contracts with supplies to the police.

Aleksander Reberšek, an MP for the coalition New Slovenia (NSi), allowed for a mistake or two having been made, but stressed that “the times were really demanding”.

He believes it is not “fair to ‘exaggerate’ the Court of Audit’s findings in one direction only”.

Mateja Udovč from the coalition Modern Centre Party (SMC) said law enforcement should now do it job, which could serve as a basis to demand that politicians assume their share of responsibility.

The opposition Left’s Miha Kordiš said the goal of PPE purchases was not protecting people: “The mess was created on purpose and consciously to get commissions.”

MPs of the Pensioners’ Party (DeSUS), which left the government coalition in December, said the report should be seen as a basis to make improvements to the system.

Robert Polnar said it in fact just revealed the state of things last spring when demand had significantly exceeded supply.

A set of recommendations drafted by the LMŠ, SD, Left and SAB on the basis of the report had been all voted down already at committee, not making it to today’s session.

The post Opposition, coalition MPs on opposite banks over PPE procurement appeared first on Slovenia Times.