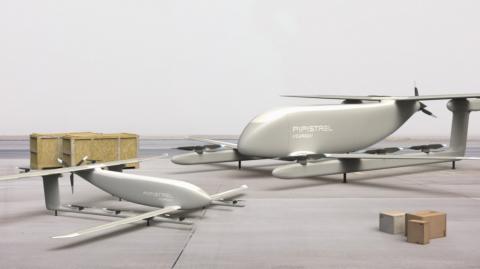 Ajdovščina – The Slovenian aircraft producer Pipistrel has entered a partnership with a Chinese logistics company to develop a large uncrewed commercial aircraft that will be able to carry more than 300 kg of cargo to the distance of 500 kilometres and altitude of 6,000 m.

The aircraft is commissioned by SF Express, and its Munich-based subsidiary Amazilia Aerospace will develop an advanced digital system for the innovative cargo aircraft designed and manufactured by Pipistrel.

Announcing the deal, the Ajdovščina-based company said that the Chinese partner intends to use the aircraft mostly for cargo transportation to remote and hard-to-access locations.

It will be able to carry cargo with a volume of up to 2.3 m3. Vertical take-off and landing will be possible up to an altitude of 2,500 metres.

The unmanned commercial aircraft will be equipped with eight propulsion systems for vertical take-off powered by Pipistrel’s E-811 electric motors with high-performance batteries.

It will be able to continue to fly even if two of the eight motors fail, the company said, adding that design and production of the prototype components would take place in Pipistrel facilities.

It is believed that uncrewed areal vehicles will become the main means of transportation in China, as SF Express alone will need more than a thousand of such aircraft in the next ten years.

On the occasion, Pipistrel director Ivo Boscarol said that “one of the largest logistics companies in the world picking Pipistrel … is a great acknowledgment to its know-how and achievements in more than a decade of work in electric aviation”.