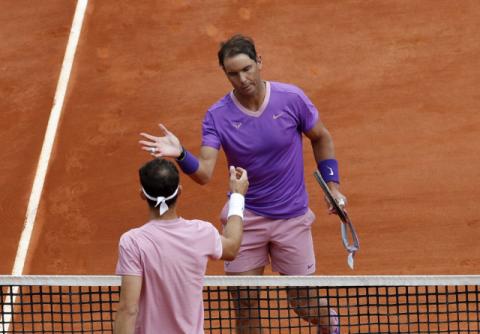 The only Bulgarian in the elite tennis Grigor Dimitrov played one of the workst matches not only against Rafael Nadal or someone among the "big three", but also in his career as a whole.

Grigor made more than 30 unforced errors and was defeated in less than an hour by the Matador with 1: 6, 1: 6 in the 1/8 finals of the "Masters" in Monte Carlo.

Expectations for a traditionally equal and spectacular clash evaporated somewhere after Dimitrov's first service game, in which he made three double faults and gave a breakthrough to his great opponent, and from then on he could not concentrate enough to justify hisexcessive aggression.

Risky performances only led to mistake after mistake and by the end Grigor was obviously trying to end his suffering as early as possible.

Some plays with more shots were won by Dimitrov, who even recorded more winners from the Spaniard, but the excessive number of mistakes (in combination with the first serve below 50%) did not allow any intrigue in the match.

Dimitrov certainly recorded his most unimpressive loss to Nadal, whom he faced for the 15th time, but despite one victory, he always managed to successfully oppose the King of Clay in at least one set.