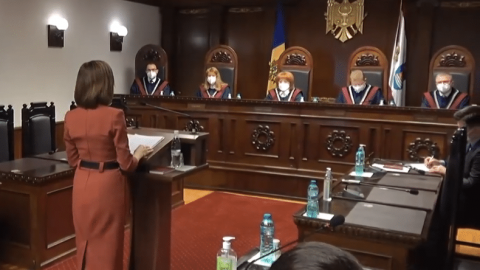 The Constitutional Court ruled on Thursday that the circumstances justifying the dissolution of parliament have been met, enabling President Maia Sandu to sign the dissolution decree and bringing early elections closer.

The court agreed to allow the dissolution of the parliament citing "the impossibility of forming a government", the president of the court, Domnica Manole, explained. The ruling is irrevocable and cannot be appealed.

Sandu appeared earlier before the Constitutional Court to present her case arguing the need to dissolve the parliament. She argued that the President is obliged to dissolve parliament if attempts to form a government have repeatedly failed.

Former President Igor Dodon, leader of the pro-Russian opposition Socialists, criticised the ruling, saying the decision was given in favour of political interests.

He argued that the court had violated its own rulings issued over the past years, and the Council of Europe's and the Venice Commission's recommendations.

Dodon threatened non-recognition of the Constitutional Court's decision and a vote of no confidence in the three court judges, demanding their resignation.

He appealed also to international partners "to intervene and stop these attempts at a constitutional coup and restore the rule of law in Moldova".

Fearing poor results in an early election, and wanting to maintain their current strength in parliament, the Socialists have tried constantly to pressure the court to reject Sandu's requests to dissolve parliament and hold early elections.