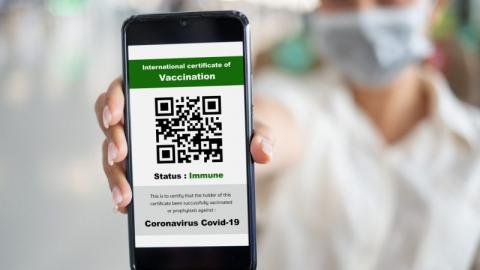 Ljubljana – The EU member states have reached an agreement at the ambassadorial level on a joint position on Covid certificates, with Slovenia emphasising that such a certificate must not lead to additional restrictions and that it must be available to all citizens.

The joint position agreed on Wednesday that would serve as a basis for the member state to negotiate with the European Parliament, and the goal is that the certificate that would make it easier to Europeans to travel is to be ready by summer.

The Portuguese presidency noted that the key change in comparison to the basic proposal of the European Commission was emphasising the fact that the certificate was not a condition for free travel and that it is not a travel document.

This is to emphasise the principle of non-discrimination, in particular in relation to persons who have not been vaccinated, while another important change is stricter provisions on protection of personal information.

Slovenia said that such a certificate must not lead to additional restrictions and that it must be available to all citizens.

It added that, in addition to adequate conditions for the issuing of certificates, what also needed to be ensured was that their holders would be provided with clear information about the conditions for crossing borders.

The Slovenian permanent representation in Brussels added that the debate had resulted in the non-discriminatory nature of certificates and personal information protection being enhanced.

In today’s debate, Slovenia noted that notification about the use of the certificate must be effective, and that technical solutions for the issuing and verification of certificates needed to be prepared.

The ministers in charge of tourism of several member states addressed a letter to EU institutions on Tuesday calling for the Covid certificate to be introduced as soon as possible, if possible by June.

According to Austrian sources, in addition to Austria the letter has been signed by another seven countries – Bulgaria, Cyprus, Denmark, Estonia, Germany, Greece and Malta.

While Slovenia had been mentioned among as many as 13 potential signatories, Economy Ministry State Secretary Simon Zajc said yesterday that the matter would be discussed by the government. He expects that Slovenia will join the initiative.