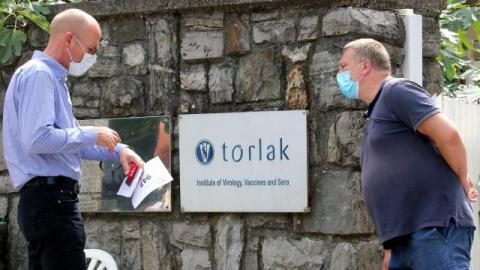 President Aleksandar Vucic on Thursday said Serbia will start producing its own Russian-designed Sputnik V vaccines in June. "Between June 5 and 10 we will have the first doses of the vaccine," he said after visiting the Torlak Institute in Belgrade, where production of the COVID vaccine started on Wednesday.

The Russian Direct Investment Fund, RFPI, on Wednesday said that vaccines produced in Serbia will also be exported to other countries of the region in future.

"Serbia has become the first country in southern Europe to produce Sputnik V … in accordance with the strictest standards," an RFPI official statement said.

According to previous announcements, Serbia will not produce the vaccine completely on its own and on its soil, however.

Minister without portfolio Nenad Popovic said a month ago that the "first phase" involved transport of the substance to Serbia and filling bottles in line with the highest technological standards. Jabs would then be packaged and distributed in Serbia and the region.

So far, the conditions of the deal between Serbia and Russia on vaccine production have not been disclosed.

"It will be a completely new vaccine factory for the Sinopharm vaccine, which we will make together with the Emirates and the Chinese in Serbia," Vucic told national broadcaster Radio Television of Serbia, RTS.

The terms of this deal are also unknown and it has not been explained why the UAE is involved in the agreement.

After visiting the Torlak Institute Vucic also said he...