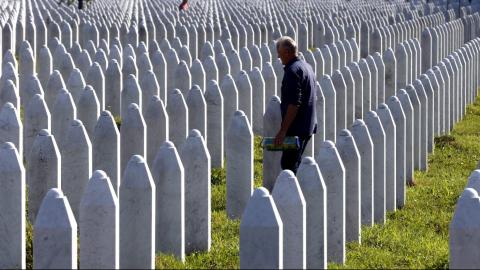 Denis Becirovic, the other lawmaker behind the proposal, said that because deputies from the main Bosnian Serb and Croat parties, the Alliance of Independent Social Democrats, SNSD, and the Croatian Democratic Union, HDZ, did not back the changes, it is now time for Inzko to step in and impose a solution.

"It is obvious that they have now completely paved the way for the international community and the High Representative to impose such a law," Becirovic argued.

Organisations representing victims of the Srebrenica genocide have also called on High Representative Inzko to impose a law, which he could do under his so-called 'Bonn powers', which are intended to allow him to over-ride nationalist politicians' obstruction of legislation vital to maintaining the peace.

The last time that Inzko imposed a law in Bosnia was 11 years ago, but advocates of a ban on genocide denial believe that there is no other way to get the legislation adopted.

However, the Bosnian Serbs oppose the 'Bonn powers' and would be infuriated if Inzko used them to bring in a law to ban denial of a crime that they do not accept constituted genocide.

'A matter of political will'

The first initiative to change Bosnia and Herzegovina's criminal code to prohibit the denial, justification or glorification of genocide, the Holocaust and...