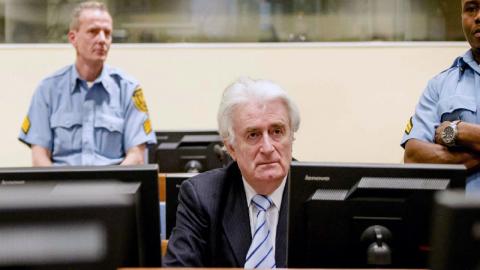 The Bosnian Serb parliament will discuss a request from Bosnia's international overseer, the Office of the High Representative, OHR, to revoke decorations given to convicted war criminals.

In February, High Representative Valentin Inzko sent a letter to the Republika Srpska National Assembly requesting that any decorations it issued to people convicted of war crimes be annulled within three months.

"Among those awarded were all former National Assembly speakers and members of the RS First Presidency, including Radovan Karadzic, Momcilo Krajisnik and Biljana Plavsic, whose actions shocked the world during the [1992-5] armed conflict and caused unimaginable human suffering. As you know, Karadzic, Krajisnik and Plavsic were convicted of war crimes by the International Criminal Tribunal for the former Yugoslavia," the letter, which BIRN has seen, reads.

The deadline expires at the end of April but Inzko didn't specify what will happen if it is not met.

In their initial reactions, Bosnian Serb politicians rejected the letter and vowed not to comply. However, as the deadline approaches, and under the threat of sanctions, they agreed to at least discuss the issue.

The assembly should take a unified position on the High Representative's demands, the ruling coalition led by the Alliance of the Independent Social Democrats, SNSD, said on Friday.

"There is no legal document that could address the High Representative's letter. Lawyers believe the only way to revoke honours is through the courts. We will see what position parliament will take," Nedeljko Cubrilovic, speaker of the RS parliament, said on Friday.

Unlike the ruling majority, the opposition said it does not support the revocation of decorations, or the discussion of...