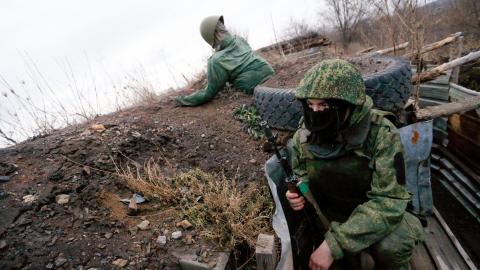 In response, the Ukrainian defence ministry has called on reservist soldiers to attend training sessions and has conducted defensive military drills near Crimea. Kyiv says that 28 of its soldiers have already been killed this year.

Beric claimed that many Balkan volunteers are heading to the so-called Donetsk and Luhansk People's Republics - areas of Donbas which have been outside the control of the Ukrainian government since the conflict began in 2014.

"If an offensive starts, I expect a large number of casualties. It will be worse than in 2014," he predicted.

The Union of Volunteers of Donbas, an organisation operating in separatist-held eastern Ukraine that is involved in recruiting fighters, has also said it is getting ready for a potential escalation.

Dozens of pro-Russian military volunteers who came to Ukraine from Serbia and Bosnia's Serb-dominated entity of Republika Srpska have already fought under its umbrella in eastern Ukraine.

The Union's leader, Alexander Borodai, who was also the first prime minister of the self-proclaimed Donetsk People's Republic, predicted that if the situation heats up further, "Russian volunteers will arrive".

'Impunity for Balkan fighters in Ukraine'

Bratislav Zivkovic, who describes himself as a Chetnik commander and claims he was one of the first Serb volunteers to go to Crimea when it was annexed by Russia in 2014, also said he believed that the warring sides in eastern Ukraine "are indeed on the edge of renewing their conflict".

"People here are absolutely against the war, not only in the Luhansk and Donetsk...