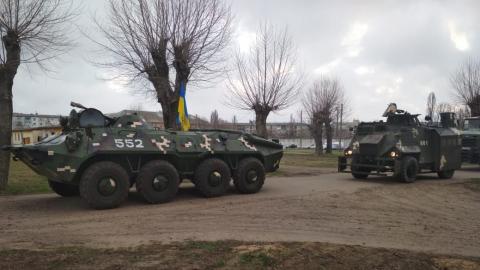 The State Border Guard Service of Ukraine announced on Thursday that it was sending reinforcements to the border with Moldova amid a worsening dispute between Ukraine and Russia that has triggered fears of all-out war.

"During the exercises, border guards will pay special attention to covering the sea coast and the estuary, preventing provocations at the border for the situation to remain controlled and stable," the press release added.

Kyiv's decision comes in the context of growing tensions with Moscow, and Russian exercises in the breakaway Moldovan region of Transnistria, close to Ukraine, where Russia keeps about 2,000 soldiers from the Operative Group of Russian Troops, OGTR, and peacemakers. The Russian-supported rebel region inside Moldova can also mobilise about 15,000 soldiers of its own.

Since the start of April, at least seven military exercises and manoeuvres were carried out by the Russian soldiers in Transnistria or in a joint format with Transnistrian troops, according to Moldovan military experts consulted by BIRN.

Visiting Moscow last week, the leader of the secessionist region, Vadim Krasnoselsky, said his army was capable of repelling a possible attack from Chisinau.

Moldovan Defence Minister Victor Gaiciuc told BIRN that Moldova was not worried about these joint military exercises on the Dniester River's left bank, in the breakaway region.