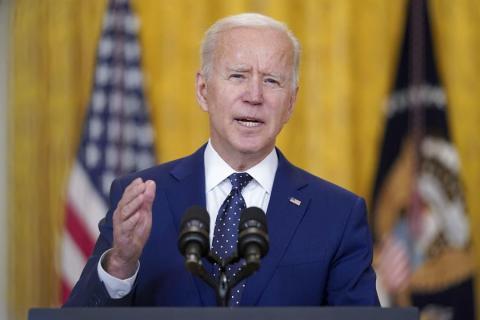 President Joe Biden's administration announced on April 16 he was scrapping his pledge for a rapid expansion in the number of refugees allowed into the United States, but seemed to backtrack later in the day after fierce blowback from within his Democratic Party.

The outcry came after a senior administration official said Biden would maintain the historically low ceiling of 15,000 people resettled a year, a number set by predecessor Donald Trump who had imposed hardline border policies.

The Biden administration had recently stated it wanted to allow in about 60,000 refugees annually, ramping up to double the following year. That aim had been part of the Democrat's broader promise to end harsh anti-immigrant and anti-refugee sentiment whipped up by Trump.

Instead, the White House will keep the strict 15,000 limit so that it can "rebuild" a broken program and deal with pandemic-related complications, said the official, who asked not to be identified.

After a top Democrat and refugee aid groups slammed Biden's target as "appallingly low" and "deeply disappointing," the White House issued a statement later Friday saying the number was provisional.

Noting that Biden has green-lighted settlement of refugees from previously blocked regions and signed off on flights from those areas to begin within days, the White House said it expected Biden "to set a final, increased refugee cap for the remainder of this fiscal year by May 15," but added that "his initial goal of 62,500 seems unlikely."

The admissions system left by the Trump administration was "even more decimated than we'd thought, requiring a major overhaul in order to build back toward the numbers to which we've committed," the senior official said.
White House National...